When I have my GPS set for a location then decide to go someplace else, it asks me if I want the someplace else  (in this case Duluth) set as a new destination or added as a via point.  Tomorrow Grand Marais, MN, is my destination and I had planned to stop at Whole Food Co-op and a pet store in Duluth.  But in the world of RVing, stuff happens and in my case a small wet area between my refrigerator and heat pump grew today.  By capillary action, the moisture spread down the entire length of carpeting.  Fortunately, I have a plastic runner much of the way, but when I picked up my purse next to the driver’s seat and it was wet, I said “oh no!”

I went straight to the Internet to see about RV repair shops in Duluth. So Duluth is now an official via point so that O’Brien’s Mobile RV can figure out what is wrong.  I had this looked at in Ispheming and they didn’t find anything.  They thought Henry’s water dish must have spilled.  I’ve looked and none of the pipes under the sink are leaking.  I think it has something to do with condensation from the refrigerator, but why it appears in the middle of the aisle and not next to the refrigerator is a mystery.  O’Brien said he would find out exactly what the problem was unlike the folks in Ispheming.  I like that attitude.

Whether or not this means I won’t make it to my destination tomorrow, only time will tell.  I think every single RVing friend I have has changed or aborted plans more than once due to get something repaired.

Here was the rest of my morning (plus a RV chore that will remain unmentionable); 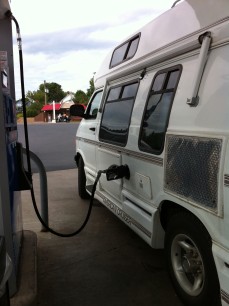 I saw this on drive back from the laundromat in Washburn.  I learned that Arlo Guthrie is performing tonight–all sold out:

And here are a few images from a late afternoon walk with Henry around Bayfield (all images taken with my iPhone):

Seems like most vehicles are carrying kayaks on racks

View of Bayfield from the marina 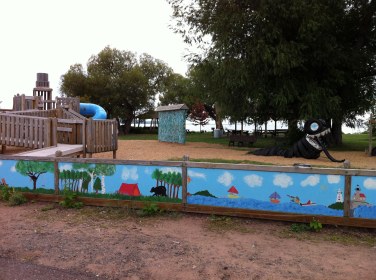 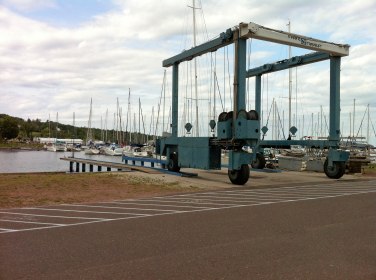 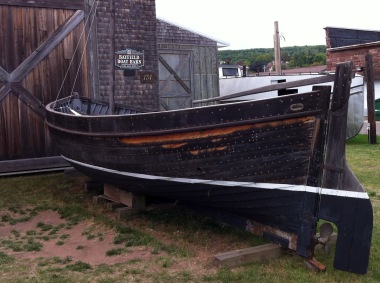 I love the lines of boats. This one looks like a Viking ship.

The city hall, boat museum, and coast guard were right next to each other across from the marina. 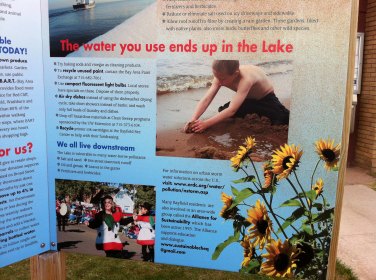 Was glad to see this on large display in front of city hall.

Henry and I went back to the campground.  We had dinner, walked, and I had a shower so we can get an early start.  Then I groomed him and checked out the water along the carpet.  Still there; darn.  A storm system is on its way so may be a little noisy tonight.  Since I started RVing, I keep three or four weather apps on my iPhone. This way I can travel before and after storms.  The winds are the big problem with RVs.  Winds=staying put.

So I’ll end with this photo of Ecovision at our campsite.  She’s up on a couple blocks on one corner to get her level.  This is essential for an RV refrigerator, which is completely different than our household variety.  The blocks will be a bit of a mess to clean up in the morning if we do get rain.  Ah, the RV lifestyle!