A few interesting things happened after I returned from the islands.  I was pretty foggy-brained, but it was only 2 in the afternoon and beautiful so I decided to explore an area that I hadn’t yet.  So I drove north on 13 through the town of Red Cliff and the big Legendary Waters casino complex.  This is on the reservation of the  Red Cliff Band of Lake Superior Chippewa Indians.  Near the casino is also the Buffalo Bay Campground on Lake Superior, but I don’t go to casinos so haven’t check this campground out.

I kept going on 13 and decided to find Little Sand Bay on Lake Superior.  I knew Apostle Islands National Lakeshore had a kayak launch there and I assumed there was a beach.  For some reason I envisioned sleeping on a beach.  I saw and followed National Lakeshore signs turning right off of 13.  The county road was paved although narrow and sloped.  I kept driving and driving and wondered if I had taken the wrong county road.  But I kept going even down a steep decline where road crossed a rocky stream then a steep incline back up.  I took a photo of this sign for my sister, Wendy, the equestrian: 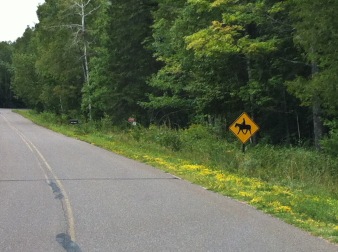 I just kept driving through coming to a more forested area and then my reward!  What I first thought was a huge brown hawk flew not more than ten feet above my motorhome!  There were other birds around it and there seemed to be a commotion of some kind.  I couldn’t identify what hawk it was, but it kinda took my breath away.  I actually wondered if it wasn’t an immature eagle.  Naw.

So I continued driving and finally saw another sign so knew I wasn’t lost.  At Little Sand Bay not only does the National Lakeshore have kayaking and other facilities, but the Town of Russell has campground called the Little Sand Bay Recreation Area.  The campground has self-registration and it was very nice.  On their website they list 32 RV campsites with electric,  tent sites, and one group site.  Here is more information from their website: Reservations by calling  (715) 779-5233, e-mail or by mail at Little Sand Bay Reservations; PO Box 79, Bayfield, WI 54814.  And I’ve inserted their campground map.  It’s amazing quiet place for kayaking, boating, and swimming and right on the big lake.

Not actually being a beach sleeper, I parked and Henry and I just ate a late lunch and relaxed a little.  Then I decided to head back to Bayfield to buy a few things at the IGA and maybe buy some postcards and a tshirt.

Back on the county roads and up and down by the creek I came again to the area where I had seen the bird.  There was a red truck pulling a pop-up headed in my direction, but stopped.   And then I saw the huge brown bird again!  I paid close attention to its size, length of tail, and other identifying features.  As it flew across the street back into the woods I noted it had a relatively short fan tail with white feathers and looked sort of like this, which is an immature golden eagle: 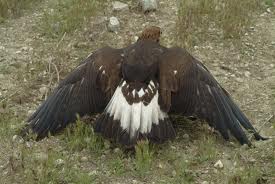 But not quite, and I don’t know if golden eagles are in this area.  I’ve seen these magnificent birds in Arizona and even videotaped a pair.  When the sun hits their brown feathers they turn to gold in the sunlight!  At that moment the mystery of why these brown birds are called Golden Eagles was solved.

I had stopped Ecovision to observe carefully and experience this huge bird (can you tell I’m a city girl :-) as had the red truck.  When the bird flew back into the woods, the red truck came forward.  I rolled down my window and signaled the driver and he opened his window.  I asked him if he knew what kind of hawk it was, and he said he didn’t but he thought it was an eagle because of its size.  I gasped and said I thought so, too!

I’ve been searching images on the Internet and just don’t know if it’s truly an immature bald or golden eagle (under age three) or another raptor of some kind.  I’m going to ask around here and then when I get home ask my cousin experts Margaret and Robert Walter.  I have enough details for my cousins to be able to figure it out.  Whatever bird it was, I felt gifted to see and feel its presence.

So I continued on and just went back to Bayfield.  I looked but didn’t buy a tshirt then did buy a few things at the IGA.  Then back to my campsite to hookup and settle in for the evening.  I thought I would only stay that one more night so only hooked electric up.  I added some freshwater to my storage tank and made a little dinner.

In the early evening I spent time planning my next couple nights of camping.  I kept striking out with Minnesota State Parks on the north shore of Lake Superior.  Many don’t have hook-ups or sites were non-reservable.  I was able to reserve for Thursday night in Grand Marais, which is only about four hour from here so could stay here another night if need be.  So I decided to see if the Two Harbors campground would get back to me and decide in the morning.

This morning I decided to just stay put another day.  I’m going to hang out a little with Henry, rest, do this posting, find a laundromat to wash my bedding, and maybe have a meal in town.  So I paid for another night here at Apostle Island Campground and found out that the only laundromat is in Washburn a little south of here.  Like the idea of a new town so it’s time to end this posting and head south.

Tomorrow I’ll drive to Duluth and hope to get to the Whole Foods Co-op. I’ve been to Duluth several times including when I worked for Michigan Sea Grant and later when taking a travel writing course through the Split Rocks Art Workshop.  It is lovely with steep cliffs and a wonderful walkway along the lake right downtown. 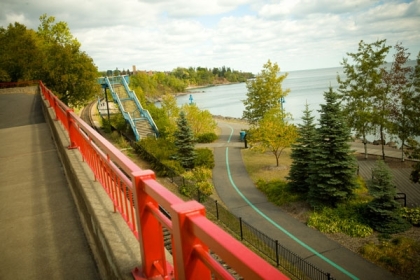 My first experience of Duluth was driving into a parking lot for a meeting and seeing large electrical plugs in front of every parking space.  I had no idea what they were for so I asked someone.  I was told that because it gets so cold in Duluth, people plug in their car’s engine block heaters while they are working to make sure they can start the car when they leave!  Boy, that’s way too cold for me!  It’s a pretty city though and well worth visiting.