I arrived in the city of Providence Bay on Manitoulin Island by 4 PM. On the half-hour drive from South Baymouth, where the ferry drops you off, the landscape was primarily conifers with a smattering of birch. There were also large expanses of bare pasturelands and farmland that looks fallow. I only saw a handful of resting buckskin-colored cows on the rockiest field I’ve ever seen. Much of the conifers are in wooded wetlands and it looks like they’ve seen heavy rainfall of late.

Going east on Government Road led me to Providence Bay and I had to stop and soak it all in.

Next was finding the Auberge Inn where Heidi greeted me and helped me carry things in.

More on this Inn later, but I wanted to share my afternoon experience on the Chi-Cheemaun ferry.

I got there early and was the first one in line. I had learned you could do this and then lock and leave your car until a half hour before departure.

The first boat down the bay was a bright red Canadian Coast Guard vessel. I saw these vessels frequently when I worked in Windsor and one of the scientists who worked with me was retired from the US Coast Guard. For some reason, these brightly painted vessels always make me smile.

I spent over an hour walking around town in the bright sun, buying a snack, and going to the bookstore. And yes, I did buy a book. I found one on the Georgian Bay coast with lots of information on islands. Then I closed my eyes and left :)- 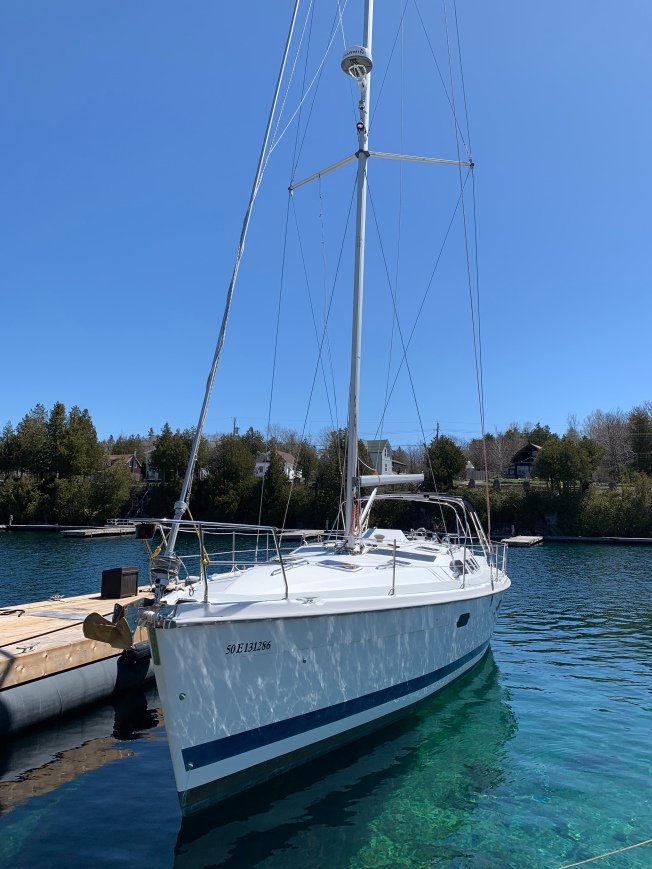 I returned to my car and waited for the ferry. As you can see in this photo, the ferry when it is docked looks like a giant duck bill that’s going to swallow all the cars, campers, and trucks. It’s quite beautifully painted and on the side it reads “Travel in Good Spirits.”

I learned that Chi-Cheemaun is Ojibwa for “big canoe” and that the ferry has been running for 40 years.

The view from the stern of this large ferry while we were docked was spectacular. 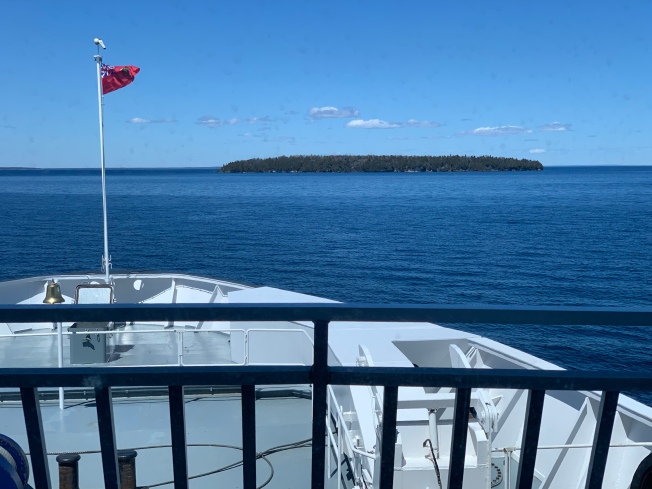 The smooth ride took almost two hours. After getting chilly out on the deck, I put my feet up inside and read Doing Justice by Preet Bharara on my Kindle. A very, very good read.

Not quite two hours in we all had to go down and sit in our vehicles and wait for the ferry to dock. First off was this huge truck carrying cattle, I believe.

I did my typical thing and didn’t stop in the town but headed straight for Auberge Inn. So I’m sitting here in the common room with my feet up ready to do a little reading about Manitoulin Island.

3 thoughts on “On the World’s Largest Freshwater Island: Manitoulin”