I thought with a wonderful setting right on Lake Michigan that this state park would be a lovely place to camp. Not so much. Gorgeous sky and clouds greeted me Wednesday, but from there it was all downhill.

The day-use parking lot was empty and there were hardly any campers. I had my pick of hundreds and hundreds of sites. All but two handicap sites were gravel and very few seemed level. Felt kind of sad here despite the lovely weather. 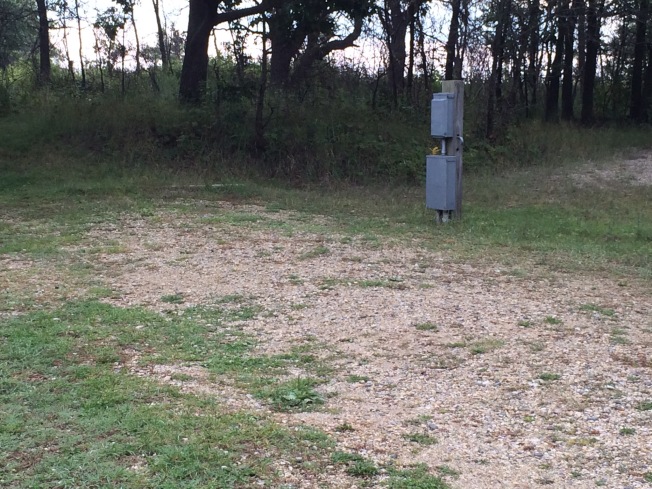 I picked one backing up to the lake relatively near the shower house. I think there are only two shower houses and they are spread way apart. In this photo it looks like there are more campers than there actually were because we’re all down by one of the shower houses. 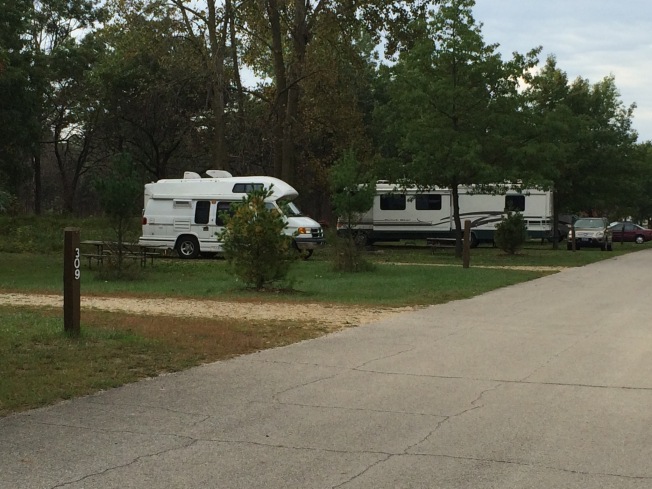 They have been planting young conifers to improve the sites. 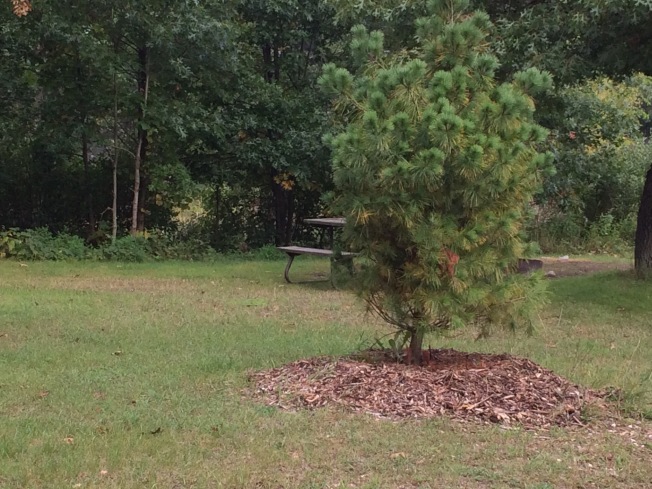 I was beat by the time we settled in so I just made dinner, walked Henry, checked email, read and turned off the light early.

Thursday morning I got a late start as I struggled with my Verizon MiFi. It again was asking me to sign in and pay more money. I called technical support and a nice customer-service agent who not only explained what happened and ways to avoid it, but gave me back all those 3 GB! I learned I had used up 3 GB just since Saturday and a likely culprit was Facebook automatically playing videos. I can do Facebook just fine on my iPhone so I’m not even going to check it on my computer. Plus I turned off that feature in my iPhone settings.

At that point it was time for lunch so Henry and I ate. I was still dragging, but I thought I better get a shower before leaving. That was a big mistake. While the shower house looks old-fashioned, but okay it was not pleasant inside.

Clean, yes (I think), but there was not one hook and you had to be a midget to feel comfortable in the shower stalls. Worst of all you have to reach in to push a button to get the water going and it sprays all over everything that you have in the “dry” part of the stall. My Birkenstocks, even though outside the shower well, got soaked. I ended up using both of the shower stalls, one to keep my clothes dry and the other to shower in. At least the temperature was good and I did get clean.

The take-away message is that the State of Illinois has a huge missed opportunity at Illinois Beach State Park. This park is on one of the most beautiful lakes on Earth with an expansive shoreline, but it needs a huge renovation to bring it up to 21st-Century standards. Indiana Dunes State Park was gorgeous and packed while this one was drab and empty. So Illinois get with the program!