Funny but on this trip every day seems so long.  Not in a bad way, but it feels noticeably different.  It’s nearly 10 p.m. and I feel like I left Copper Harbor a couple of days ago rather than just 12 hours ago.

It was a gorgeous morning and I woke at 8.  My cold seemed much better.  I determined to leave earlier than 10 so I left Henry half awake to take my shower first rather than care for him right away.  That meant I got in the shower before it got busy.

Campgound showers often are in short supply.  One campground I stayed at this trip–Wandering Wheels in Munising–had only two showers for all the women!  There was a line up of frustrated women each day.  I won’t go there again.  State parks in Michigan tend to have more showers and they are clean.  Overall, I have found private campgrounds to vary from pretty awful to pretty marvelous.  They often have more amenities that I’m not interested in like pools, cable tv, and shuffleboard, but usually lack the more natural setting of public campgrounds.

I did take the time to walk Henry down to the lake.  He remains fascinated yet those precious feet of his still have not touched the water.  Lake Fanny Hooe was calm and lovely.  Campers were ready to go fishing.

Here’s my co-pilot right after I put on his safety harness and hooked him into the seat belt.  He knows the drill.  Cute, eh?  We were on the road by 9:30. 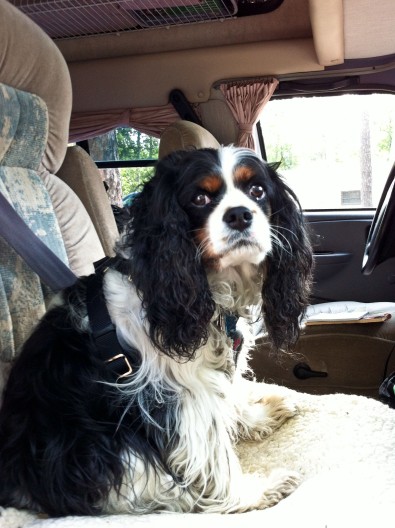 My co-pilot Henry Boy on duty

One of the campers–who has been coming to Fort Wilkins for 18 years–told me about a monastery and its jam store on the M-26 shoreline road to Eagle Harbor and Eagle River (click here for a write up on Hunt’s guide about this drive).  She raved about the monks’ baked goods and preserves.  I am so glad she told me because not only did I eventually get to the monastery and store, but came upon the marvelous town of Eagle Harbor. 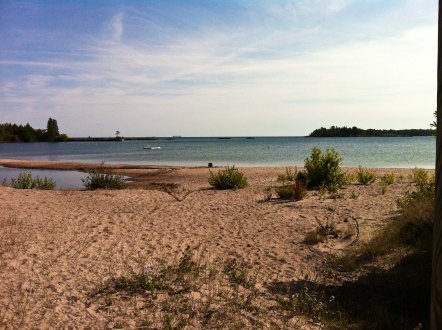 What a gem, and I will go back.  It felt happy and friendly, and the women volunteers I met at the lighthouse were just that.

I’m not that interested in lighthouses, but I did go to the one here.  It’s a very narrow and steep entry for a motorhome and I was glad mine is small and nimble.  The reward was seeing a saltie (an ocean-going ship) and a laker (a ship that stays in the Great Lakes) going by at the same time.  While I realize it is difficult to see the boats on the horizon in the image below, if you click this (or any image in this blog) you’ll get a larger one.  [By the way, this image (and all the images in this posting) is from my iPhone.  I have much better images taken with my Nikon, but haven’t process them yet.] 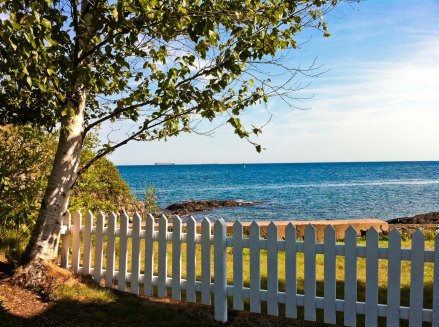 In the distance, a saltie on the left and laker on the right.

As you can see, it was another glorious day. Here’s the lighthouse.

Back on the road I stopped once at Great Sand Bay then at the monks’ shop, the Jam Pot, and the monastery.

A monk with a very long beard helped me (sorry for the very poor image quality).  I liked that he was fully present and our eyes truly met and exchanged kindnesses.  I asked if taking photographs of the monastery was alright and enthusiastically he said yes.  I left a small donation and when he thanked me I shared that I am a Quaker and respect those seeking to live a holy life.  I bought seedless blackberry jam and plum jelly plus an apricot muffin.

I had seen the shiny golden monastery from Big Sand Bay.  The monastery is right on Lake Superior and surrounded by flower, fruit, and vegetable gardens.  It’s lovely although I couldn’t help but think of how rough winters must be.  I had seen a very tall red sign in the shape of a measuring stick saying the record annual snowfall was something like 305 inches!  Of course, the snow would provide quiet and isolation essential to monastic life. 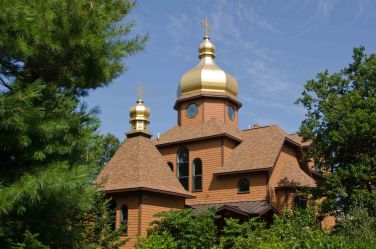 I finally pulled myself away from the monastery around noon.  I only stopped once more to get gasoline and walk Henry in Wakefield, Michigan.  We walked along Sunday Lake next to the gas station.  Nice name, nice little lake.

I drove under one rain cloud and a second cloud that wanted to be a rain cloud one day.  So a tiny bit of rain for a couple of minutes.  The rest of the way was smooth traveling with only one area of construction that didn’t even slow us down.

Arrived at Bayfield around 4 p.m.  I had called the National Park then the Bayfield Visitor Center to confirm the nearby campgrounds.  I tried the public one just north of town first.  It was on a steep, narrow, roughly paved road and the campsites were awkward and small.  Right on Lake Superior though, but with me needing to get in and out every day it just wasn’t practical.  So I drove north and registered at Apostle Islands Campground (http://www.apostleislandsareacampground.com) for two nights and possibility of a third.  Wifi works great and my site is just fine and is an easy in and out.

After checking out my site, I drove to Bayfield and bought a ticket for the “Grand Tour” of the Apostle Islands tomorrow.  It begins at 10 a.m. and takes three-and-a-half hours.  Weather is supposed to be great and this tour gets out to the most number of islands.  I’ll leave Henry in town in Ecovision on a shady street and try not to worry.  My focus will be on taking photographs and notes and just experiencing the archipelago.  Oh, I so love being on the water like I did so many summer weekends on Lake St. Clair with my Dad (and later me) at the helm of our small wooden powerboat.

I had an unremarkable and expensive broiled whitefish dinner.  The fish was good though everything else ws forgetable.  I have decided to have one dinner out a week.  I really prefer to eat lunches out and be settled into the campground to eat dinner in Ecovision.  But on travel days (which is almost every day!) I don’t like to stop for lunch and I have plenty of food on hand.

After dinner Henry and I walked around the marina then headed to the campground.  I had to use blocks on one side to get level then I hooked up the water and electric.  Each campground and campsite is different so each time it takes some juggling.  RVing is amazingly physical.  But we’re all cozied up and now it’s time for bed.  I’ll leave you with a photo of Ecovision, who likes to have her picture taken in pretty places like Eagle Harbor :-)

2 thoughts on “From Copper Harbor, Michigan to Bayfield, Wisconsin”